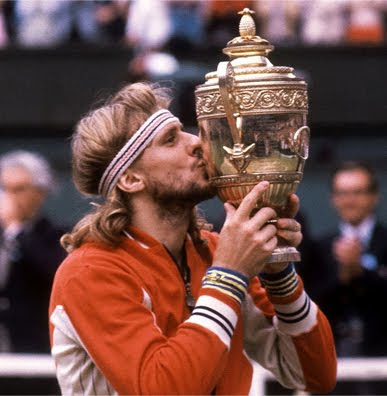 Bjorn Borg was born in Stockholm in 1956. He enjoyed a successful Tennis career which included eleven Grand Slam titles, including an impressive six victories at the French Open. Borg's notorious icy exterior meant Tennis commentators tagged him with the nickname 'Ice Borg' relatively early in his career. This name never seemed more apt than when Borg faced his nemesis John McEnroe.
The intensity of McEnroe and Borg's rivalry was never greater than during the famous Wimbledon Men's Singles Final of 1980. Unfortunately for Borg, most Tennis fans look back nostalgically at McEnroe's dramatic fourth set victory, and sometimes forget that Borg was the eventual victor in what is generally considered to be one of the greatest finals in the history of the tournament. The final score was 1-6, 7-5, 6-3, 6-7 (16-18), 8-6. During the course of his career, Borg amassed over $3 million in prize money. His achievements were recognised when he was inducted to the International Tennis Hall of Fame in 1987.