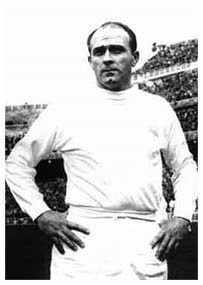 Two-time European Footballer of the Year, Alfredo Di Stéfano (1926) is believed by many to have been the best all-around player in history. Di Stéfano was a powerful forward blessed with stamina, tactical versatility, and above all vision. He played for River Plate, Huracán, Millonarios Bogota, but was most successful in his role as conductor of Real's symphony of attacking football. After having almost been signed by FC Barcelona, he led their rivals Real Madrid to five consecutive European Cup victories. Di Stéfano won caps for Argentina, Colombia, and Spain, but never graced a World Cup. He moved to Espanyol in 1964 and played there until hanging up his boots at the age of 40.