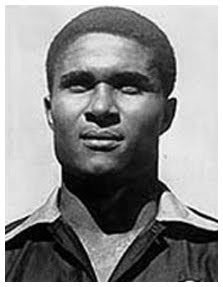 Eusébio da Silva Ferreira (1942) scored an incredible 727 goals in the 715 matches he played for Benfica. His goals helped the club win eleven Portuguese league titles as well as the 1962 European Cup (Eusebio scoring twice in the final). The Mozambique born striker virtually single-handedly took Portugal to third place at the 1966 World Cup, scoring nine goals in six matches. Eusebio's trademarks were his speed (he was a former under-19 Portuguese 400, 200 and 100 metre champion), quick dribble, and powerful and accurate right-footed strike. Until recently Eusebio was the all-time leading scorer for Portugal, with 41 goals in 64 matches. He was named European Footballer of the Year in 1965.