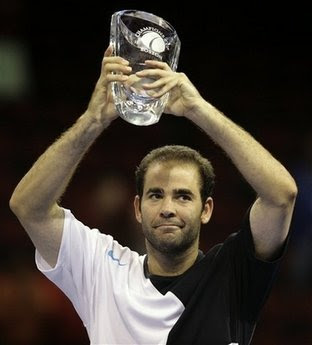 Pete Sampras was born in 1971 in Washington D.C. He first captured international attention when he beat Andre Agassi in the final match of the U.S. Open at the age of only nineteen. The roots of a long rivalry were born during the match.

Sampras was always at his most comfortable on the lawns of Wimbledon. He often referred to Centre Court as his "Cathedral". He won his first Wimbledon title in 1993 and would dominate Centre Court for the duration of the 1990s, losing out only to Dutchman Richard Krajicek in the 1996 semi-finals. Fans who flocked to Wimbledon to see Sampras play became even more excited when he was pitched against Agassi. Yet his success was not restricted to Wimbledon alone; from 1993-8 Sampras was ranked as the World Number One on the basis of his success in a variety of Championships.