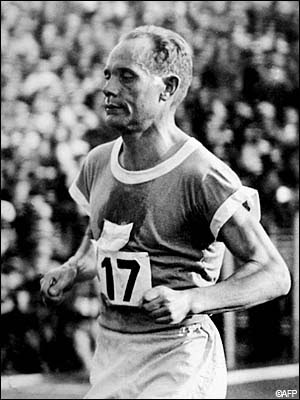 Paavo Johannes Nurmi was a Finnish runner. Born in Turku, he was known as one of the "Flying Finns"; a term given to him, Hannes Kolehmainen, Ville Ritola and others for their distinction in running. During the 1920s, Nurmi was the best middle and long distance runner in the world, setting world records at distances between 1500 m and 20 km.

Nurmi won a total of nine gold and three silver medals in the 12 events in which he competed at the Olympic Games from 1920 to 1928. In 1932, Nurmi was unable to compete at the Olympics, as he had received money for his running and was thus considered a professional.

In 1924, he won five gold medals in five events, including the 1500 m, 5000 m (with only 26 minutes between the final races; as a tryout he had broken the world record in both of these events earlier the same year, the 3000 m team race, and again both cross country events. It was the last time these cross country events were held, as the great heat caused more than half of the competitors to abandon the race, and many more had to be taken to hospital. Finnish officials, fearing for his health, refused to enter Nurmi in the 10,000 m event. Thus, he was unable to defend his title. An angry Nurmi protested after returning to Finland by setting a 10,000 m world record that would last for almost 13 years.

Nurmi ended his Olympic career at the 1928 Summer Olympics, winning the 10,000 m and two silver medals Nurmi has won the most Olympic medals in Track & Field, 12 total. He ties Larissa Latynina, Mark Spitz, and Carl Lewis with nine Olympic gold medals, second only to Michael Phelps with fourteen. Due to this fact, he is often considered the greatest Track & Field athlete of all time.

During his competitive running career, which lasted from about 1919 to 1934, Nurmi earned a reputation for speaking very little off the track. An illustration of this was his two-word reply to a congratulatory speech during his 1925 tour of the United States: "Thank you!". In contrast to another famous early 20th-century Finnish Olympic running champion, Hannes Kolehmainen, he also rarely smiled in public. No wonder he was nicknamed "A Great Silent One" by some contemporary Finns…

Paavo Nurmi is one of only four athletes to win nine gold medals. His feats are particularly impressive because they were achieved in endurance events and because he was prevented from continuing his Olympic career after he was charged with professionalism. Nurmi made his first Olympic appearance in 1920 in the 5,000m. He earned a silver medal behind Joseph Guillemot of France. Three days later, Nurmi defeated Guillemot in the 10,000m.

Three days after that, Nurmi won the cross-country race and gained an extra gold medal because the race also counted towards the team cross-country event, which Finland won handily. On 10 July 1924, at the Paris Games, Nurmi performed one of the greatest feats in Olympic history. First he won the 1,500m. Then, two hours later, he won the 5,000m.

Two days later, on one of the hottest days in Parisian history, Nurmi won the 10,000m cross-country race by 1 minute 24.6 seconds and gained another gold medal in the team cross-country event. The following day, while most of the other runners were recuperating, Nurmi finished first in the 3,000m team race.

He had hoped to defend his 10,000m title, but Finnish officials refused to enter him in the event. Back in Finland, an angry Nurmi made his point by setting a 10,000m world record that would last for almost 13 years. In 1928, Nurmi completed his Olympic career by winning the 10,000m and earning silver medals in the 5,000m and the steeplechase.